Put Out a Green Welcome Mat for Migratory Birds

The beauty these birds bring to your garden and the knowledge that you are making their journey easier, will give you much heartfelt joy. 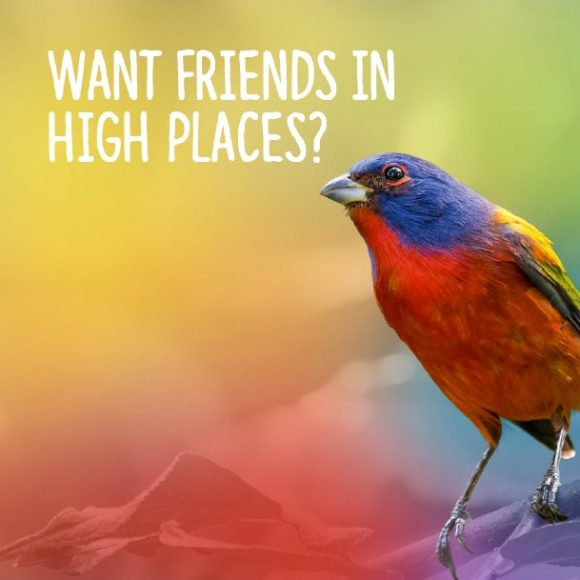 Hello South Floridians!  Just imagine for a moment if, in order to survive, you had to embark at night on a very long, difficult, and dangerous journey, in which you had to travel under your own power, guided only by the moon and stars, an internal compass and map and known landmarks.  Imagine further that you have to stop during the day to find food to give you energy to continue the journey ahead, without access to money or markets, but rather relying on the generosity of strangers.  That is the journey migratory birds make twice a year, and you are the stranger whose generosity can fuel their journey.

When dawn breaks on the horizon, these migrating birds start scanning the world below for a welcoming bit of greenery in between the pavement and the buildings.  You can lay out a green welcome mat in the form of a garden filled with native plants that provide tasty treats like insect protein snacks and juicy berries, seeds and nectar, and perhaps a water feature where these beautiful and vulnerable creatures can refresh themselves before continuing on their journey.  The beauty these birds bring to your garden and the knowledge that you are making their journey easier, will give you much heartfelt joy, which is a powerfully positive feeling.  Read on to learn how you can make friends in high places by putting out a green welcome mat.

But first, check out how perfectly positioned your garden is to provide sanctuary and sustenance to migrating birds: 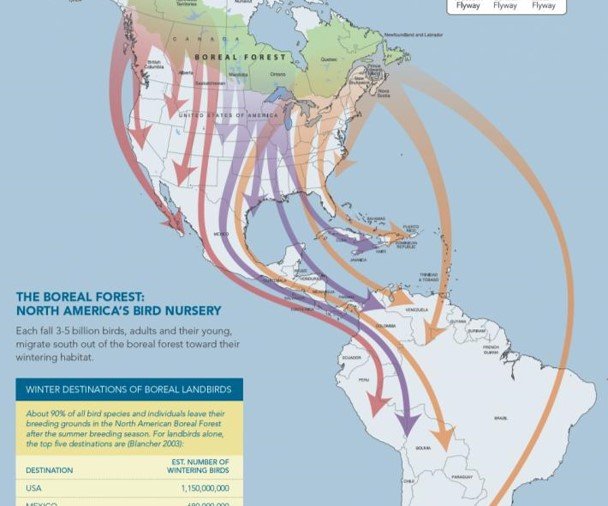 The original snowbirds fly towards the stable weather of the tropics that promises them consistent daylight and warmth.

Let's take a moment to talk about why birds migrate.  Many bird species cannot survive the freezing temperatures of the northern climate, and cannot find sufficient food in a frozen landscape.  The tropics offer stability in the form of consistent daylight and warmth and enough food to ensure that the birds can survive.  However, competition for that food means the tropics cannot support the demands of raising a family.  The North American spring and summer offer something unique: the biggest explosion of biomass in the world, whereby photosynthetic processes go from suspension into overdrive.  This is fueled in part by soils rested by winter, but more so by the increase in sunlight, which is double the amount offered in winter.

What is as important as their winter and summer homes are the spring and autumn migratory routes - few more important than South Florida. During the spring, many birds leave Central/South America and the Caribbean islands and first arrive in South Florida. Arriving in a healthy ecosystem is essential for them after having flown hundreds of miles over water with no food - can you imagine? - and this is where your garden comes in. In the fall, their journey is reversed.  Most songbirds migrate during the night as they are not able to catch insects while flying. This results in huge ‘fallouts’, whereby tens of thousands of birds, having flown all night, suddenly fall out of the sky at dawn and descend on green spaces in search of food. These ‘fallouts’ can be detected by weather radar - birds carry a radar signature, in the same way that water particles do in rain - allowing us to see the huge swarm ahead of time.

In this radar image from the National Weather Service's Key West facility, a massive flock -- 90 miles out from the center -- of as many as 118 species of migratory birds is seen moving north on a February night. The green/yellow objects are biological objects flying north over the Keys. The darker blue objects indicate rain. [National Weather Service]
Maintaining a healthy, chemical-free biodiverse garden, with a water feature and a variety of native plants that attract insects and offer berries and nectar, is critical to the survival of these ‘passage’ migrants. The habitat quality of their migratory routes is just as important as that of their winter or summer homes. Birds start arriving from their winter destinations from February until the middle of May. The first migrants are typically Louisiana Waterthrushes, Yellow-rumped and Palm Warblers and the last being Blackpolls - who mostly arrive from Colombia - and Painted Buntings. It is just as important for southbound migrants who rely on lush gardens and plants to stock up with fat deposits before their marathon flights over water from late summer to late fall.

So, load your garden up with native plants that attract insects, and provide nectar, seeds, and berries for beautiful creatures traveling to their winter or summer homes, download a bird ID app such as Merlin, iNaturalist, or Audubon, grab a pair of binoculars, and open your eyes and ears for some spectacular sights, like this beautiful Black-and-white-Warbler, whose call sounds like this. 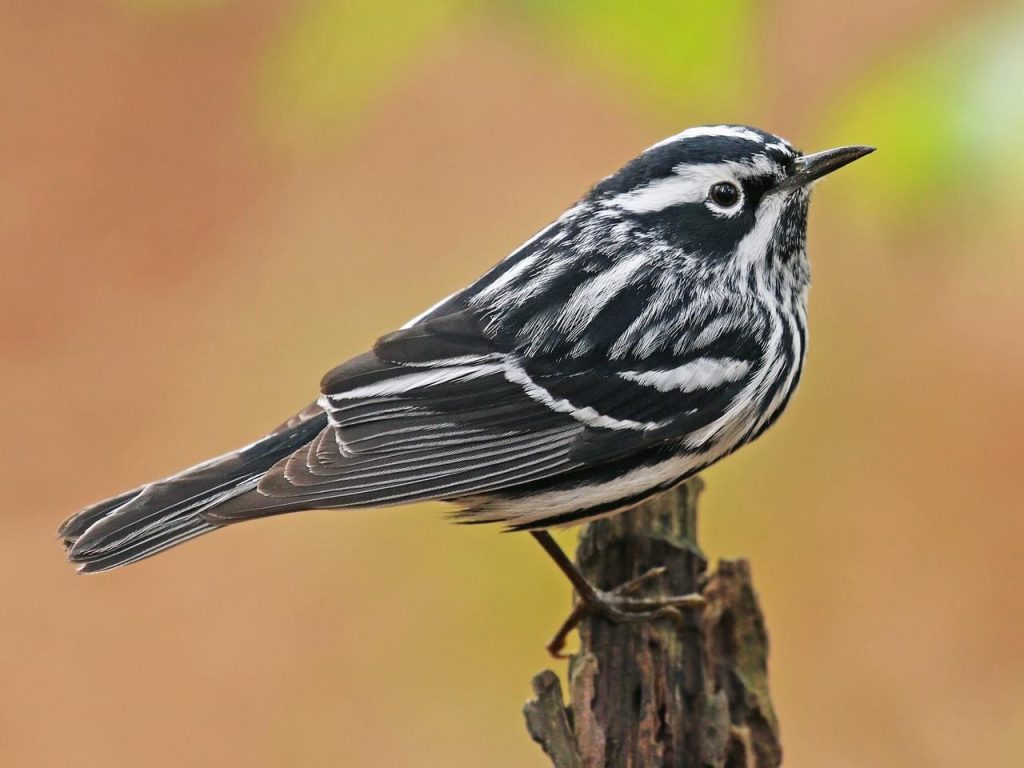 Or this Black-throated Blue Warbler, whose call sounds like this. 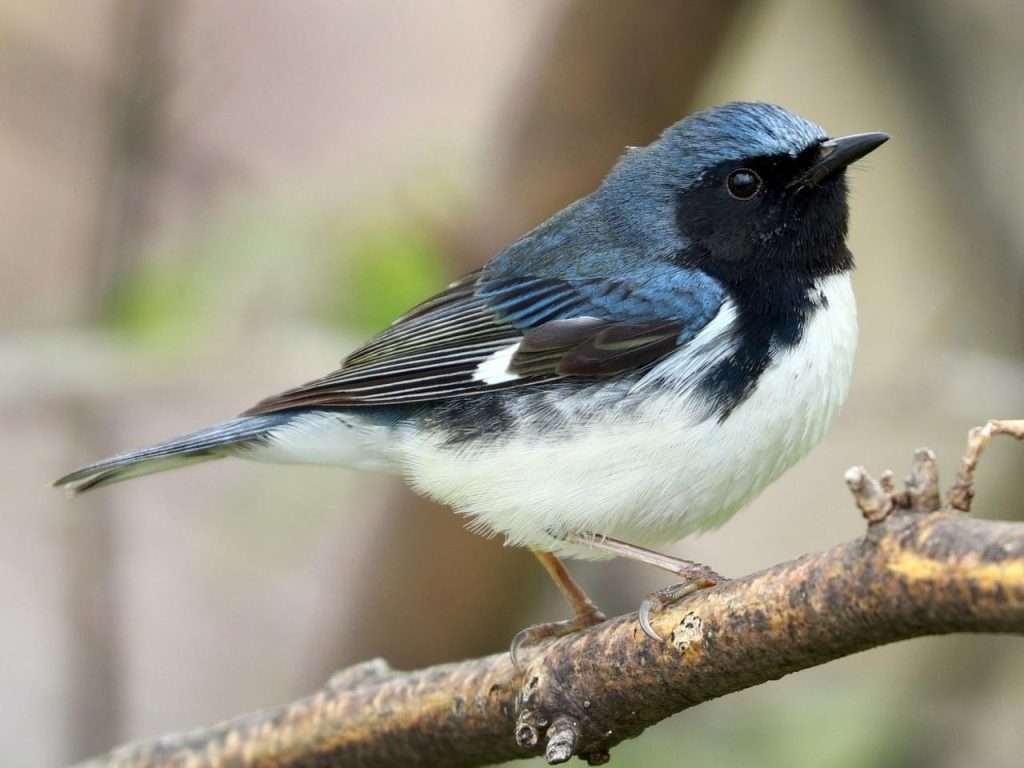 Photo taken by Aaron Marshall in Ontario, from the McCauley Library at Cornell's Ornithology Lab

Or the Cape May Warbler whose call sounds like this. 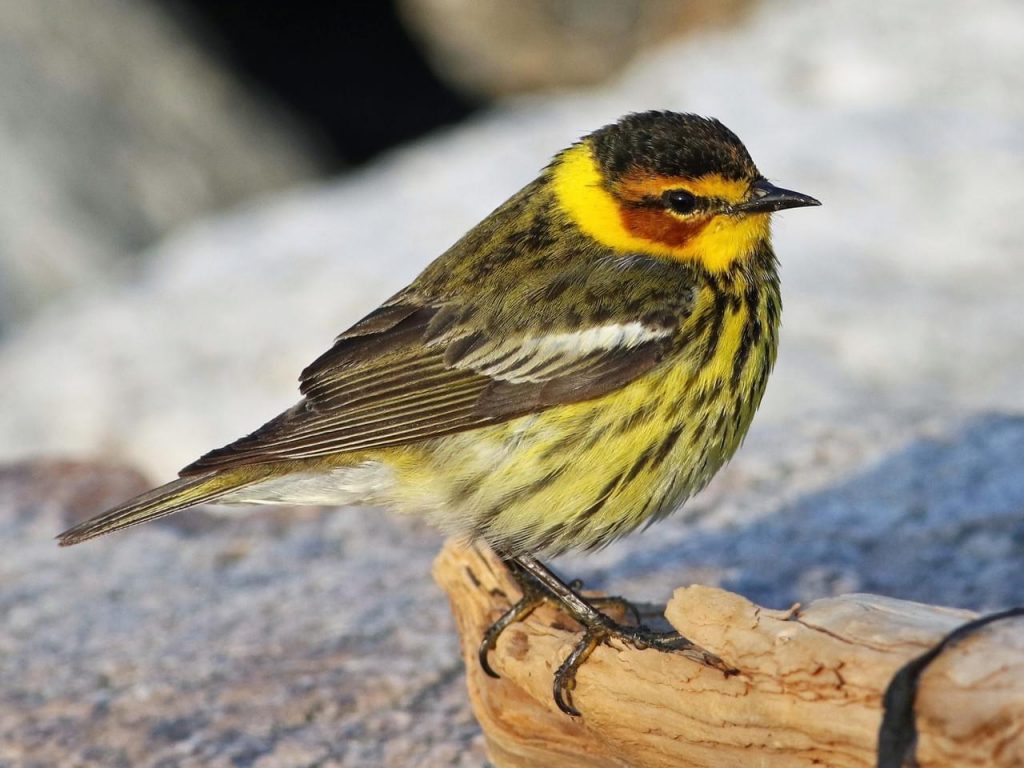 This Cape May Warbler was photographed by Keenan Yakola in Maine.

Those are just a few examples of the many passage migrants we might be lucky enough to see if our gardens are sufficiently inviting.  In addition to passage migrants, South Florida is also home to many winter migrants as climate change, habitat degradation in their usual wintering regions, in addition to urban development on their migratory routes, means that more and more birds are foregoing the trans-Caribbean flights and instead are settling in South Florida from late autumn to early spring.

Among these birds is the Ruby-throated Hummingbird, which you are almost certain to hear before you see it as it is so tiny and fast and its wings make a very distinctive sound.  The semi deciduous habitat of South Florida means that there are always flowering native plants here and the one redeeming aspect of human development - a lonely and outnumbered redeeming factor it is too - is that there are a sufficient number of gardens and habitats replete with nectar-laden flowers that can sustain a number of these birds throughout the winter. Nurseries south of Miami also provide extra nectar for them. Hummingbirds love red flowers like Tropical sage (Salvia coccinea), Firebush (Hamelia patens), and Coral honeysuckle (Lonicera sempervirens), and will visit feeders, but please be mindful of how to maintain your feeders.  If we can transform our gardens and green spaces into sanctuaries so that they can safely winter here and be spared a dangerous and difficult trans-Caribbean flight, then that's reason enough to do so, particularly given the extreme habitat degradation they’re experiencing on their migratory routes into their wintering locations. Indeed, it is likely that these birds, who’ve been around for hundreds of thousands of years longer than humans, used to always consider this their wintering home until we came along. 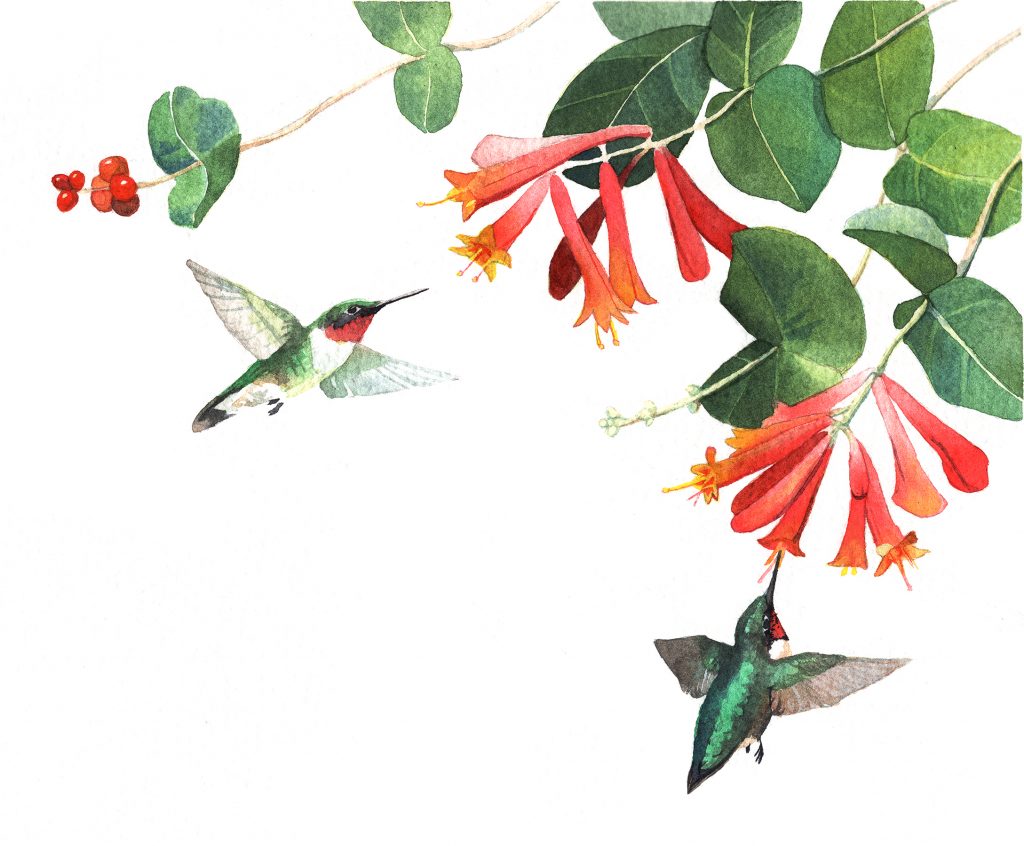 Watercolor artist Kim Heise's beautiful rendering of two Ruby-throated Hummingbirds drinking nectar from the native Coral honeysuckle vine.  Click here to see more of her beautiful art which raises awareness of the importance of protecting the beauty and biodiversity of South Florida's native plants and animals.

Last, but certainly not least, if you are really lucky, and have a combination of shrubby thickets that provide cover, low-growing plants that provide berries, and grasses and other seed-bearing plants -- not to mention a shallow water feature and a feeder filled with white millet seed -- you might have the breathtaking experience of spotting one of these glorious creatures in your garden.  Once you have spotted one, it is very tempting to want to ditch your regular life and spend the entire day in the garden hoping to get another glimpse of this beautiful new feathered friend!  Painted Buntings, whose calls sound like this, are quite shy and easy to overlook, but they often travel around the garden in the company of their larger cousin, the Cardinal, which is a hard-to-miss bird with a distinctive metallic 'chip' sound that it employs while hunting for food. 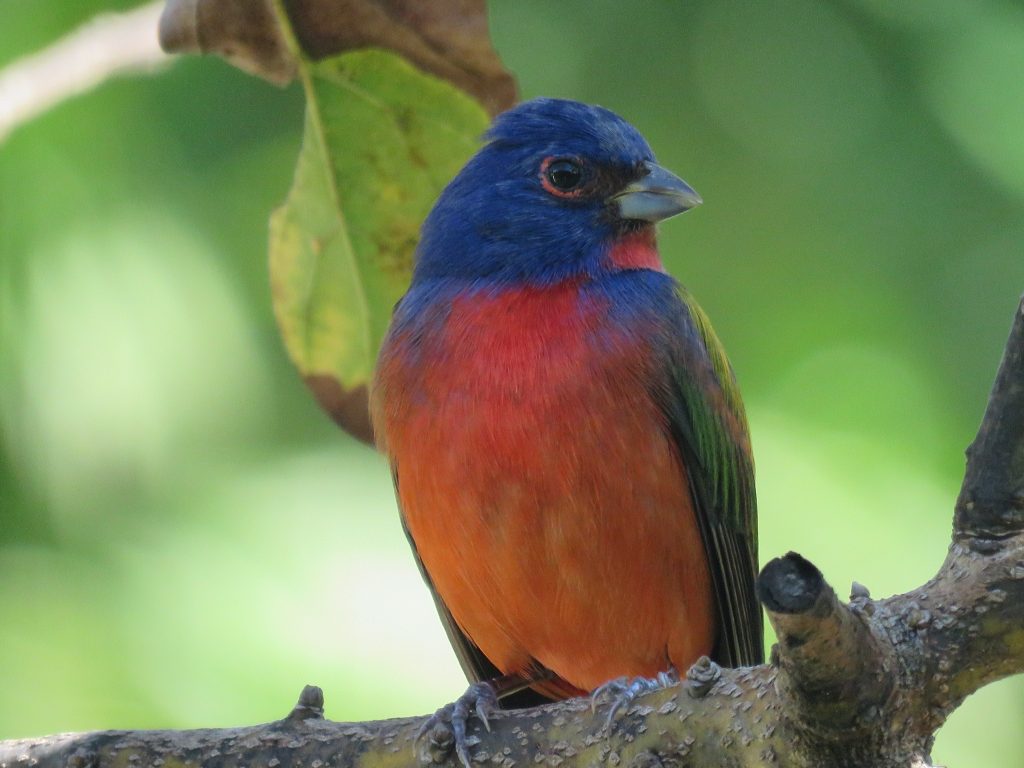 A migrating jewel with wings called a Painted Bunting. If you provide the right ingredients, they might spend the winter in your garden, hunting for seeds and insects. Photo by Michael Faisal Green

These are only a few of the friends in high places we might be lucky enough to make if we fill our gardens with the right ingredients to entice them for a day or for a season.  If you'd like to read up on other migrants, as well as those birds that grace us with their presence year around, and how to attract them to your garden, you can buy Kirsten Hines' book: 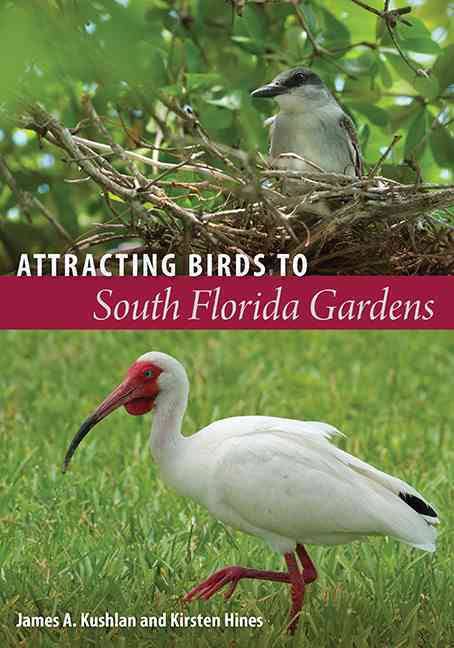 More tips on which native plants to use to attract and feed birds can be found in the following:

Attract Butterflies, Birds and Bees to your Garden with a Hedgepodge

Create a Nursery Filled with Bugs for Baby Birds

Saving Birds with a Butterfly Garden

The National Wildlife Federation can help you determine which plants in your area attract the greatest number of insects, which are the basis of protein for migratory birds.

While the National Audubon Society has a lot of great information on the importance of native plants in attracting birds and is a website that is well-worth the visit, we sadly can't recommend their database of native plants which is searchable by zip code as far too many suggestions are not actually native to South Florida.