Let's face it: if any one of us was plucked from our comfortable, air-conditioned existence and taken back in time 100 or so years, most of us would find it very difficult to survive life as a settler in the area we now call Miami Shores.  The only respite from the heat on hot days was under a shade tree, or in the relatively cool waters of Biscayne Bay.  Mosquitoes were often an inescapable torment and, with the Everglades and wet praireland nearby, venomous snakes like rattlers and cottonmouths were a constant threat.  Settlers fished, farmed and foraged for foods that we can easily find in any number of nearby stores.

Read Carol Hoffman-Guzman's fascinating history of early farming in the area, and imagine yourselves in the shoes -- or bare feet -- of the early pioneers.

Vegetable and fruit farming has long been an essential aspect of life in the greater Miami Shores area, starting with the Seminole Indians and the later homesteaders in the mid-1800’s. Let’s take a look at the evolving history of gardens, farming and agriculture among the early Miami Shores settlers.

Various history books give hints about the settlers and their gardens. The earliest pioneers often survived on local plants, fish and game gathered from the surrounding environment, as did the prehistoric tribes such as the Calusa and later the Seminoles. Thelma Peters, in her book “Biscayne Country,” suggests that we should think of the Biscayne area as a wooded island surrounded by a grassy, wet prairieland. Many homesteaders soon realized that the wetlands were not decent for long-term homes or gardens, so they settled on the higher wooded area, called the Piney Woods. However, this area was primarily a rocky limestone ridge that didn’t offer much in the way of good soil. Additionally, the available plant life was rather thin – mostly scrub palmettoes, pines, and coontie plants, along with some native “weeds.”  In the photo below, you can easily see how sandy the soil was. 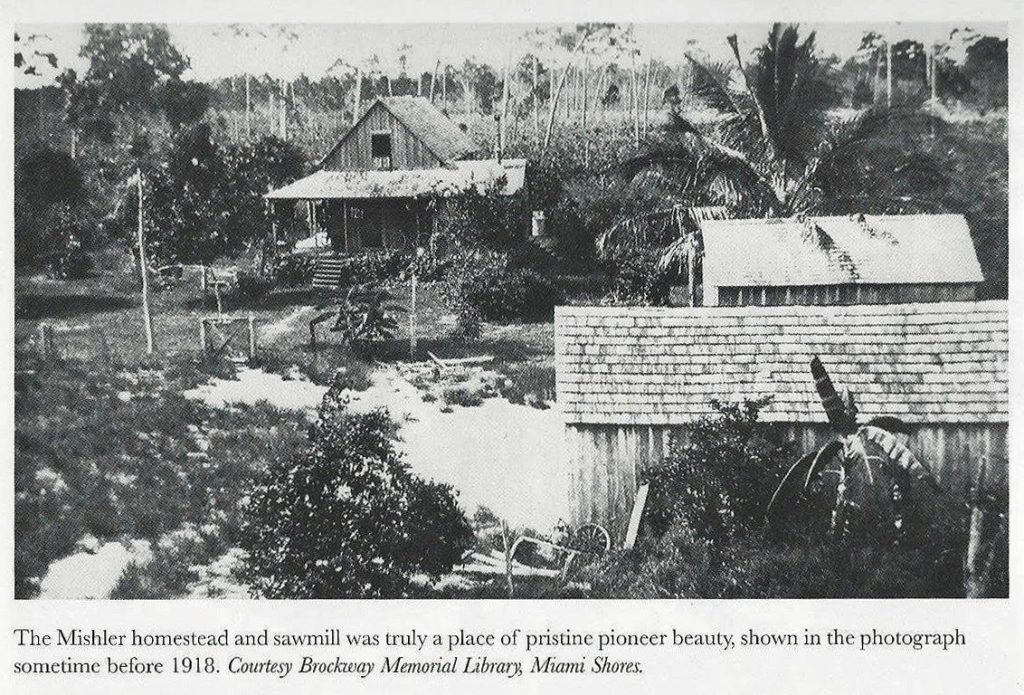 Photo used with permission from Seth Bramson's "Boulevard of Dreams".

Miami Shores settlers from North Florida, Georgia, Alabama, and the Carolinas were mostly poor people from the back country. Seth H. Bramson, in his book “Boulevard of Dreams” about the Biscayne area, states, “The first settlers were essentially subsistence farmers. . .” (see footnote 1). Their focus was on simply growing enough food to feed themselves, their families and occasional visitors. Initially the output was only minimal, with little or no surplus food for trade. These Southerners also knew which native plants were edible, including pokeweed, sorrel, dock and other greens that were good in stews and soups. Huckleberries, wild Muscadine grapes and elderberries also grew in season in some areas in Florida.

Some early homesteaders brought with them plants from their prior gardens: tomatoes, sweet potatoes, beets, carrots, celery, eggplants, corn and peppers – some survived, some didn’t. New settlers also brought with them fruit plants and trees from their home states in the Southeast and Midwest. Such fruits included strawberries, oranges, limes, pears, peaches, and oaks with edible nuts. Local and tropical fruit trees were later adopted to their diet.  Despite the poor soil, Mrs. Sturtevant, an early settler, wrote in 1875:

"'We will persevere in our pleasant work and have the oranges, lemons, limes, tamarinds, figs, bananas, pineapples, mangoes, sappadillas, alligator pears, Jamaica apples, Japanese plums, sugar apples, guavas, papaws, and dates in readiness for our visitors.  Mammee apples and cocoanuts require more time: a few of the latter have attained considerable size and may be expected to fruit in three years, but there are plenty in bearing in our neighborhood'" (see footnote 2).

As Thelma Peters points out, Mr. Sturtevant used to take a handcart to the bay to gather seaweed which he used to mulch his plants (see footnote 3).  Given the fertility of their garden, he was clearly on to something by adding organic matter that enriched the soil and kept it moist.

Early settlers gained some information about native plants from their Seminole neighbors, who occasionally canoed up the small waterways to visit and trade with the settlers. The Seminoles showed them how coontie roots could be safely processed to remove a neurotoxin to make starch. They also introduced other plants that were good for food and medicine, including the edible hearts of the local scrub palmettos and the small “Indian pumpkins” that grew in vines up into trees.

Early settlers began to augment their diet of local fish and game by raising chickens, geese, pigs, and cows (mostly for milk). Branded pigs were allowed to run loose and occasionally they interbred with wild hogs brought previously to Florida by the Spanish.

Subsistence farming was indeed the initial emphasis, but “truck farming” for sales to neighbors, outsiders and stores became a later interest. This business eventually became commercialized by families and companies, which purchased acres of land, especially for pineapples, coonties and various fruits that tolerated the sandy soil and dry season. Florida arrowroot starch made from coontie roots was sold locally and at markets in other towns, and was eventually shipped to other parts of the country. Packinghouses also shipped pineapples and other produce through new nearby railroad depots. Common garden plants, including fruit trees, could eventually be purchased from stores in Key West and later in Lemon City – and then be shipped or transported into the Biscayne and Shores areas. Local sawmills opened to harvest the formerly ubiquitous Miami-Dade slash pine in response to a growing need for houses and farm buildings. 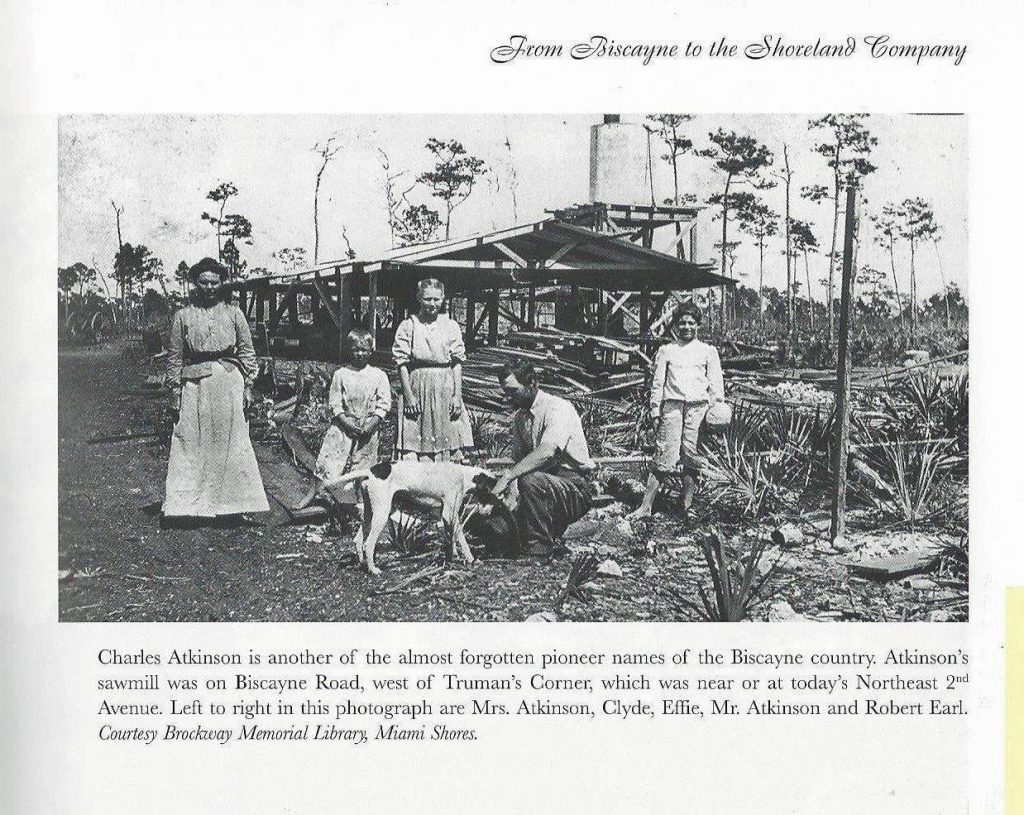 Joe Blair, who arrived in the area in 1928 to escape cold winters up north, opened a business selling fertilizer and livestock feed to farmers in the area (see footnote 4).  Although tillers and livestock feed have long since been replaced by lawn mowers and leaf blowers, Joe Blair's is still open on 79th Street.  Later, in 1949, Mercer's Seed Company opened in downtown Miami Shores, and quickly became a favorite gathering place for residents of the Shores who were interested in growing fruit and vegetables, and in landscaping their property. 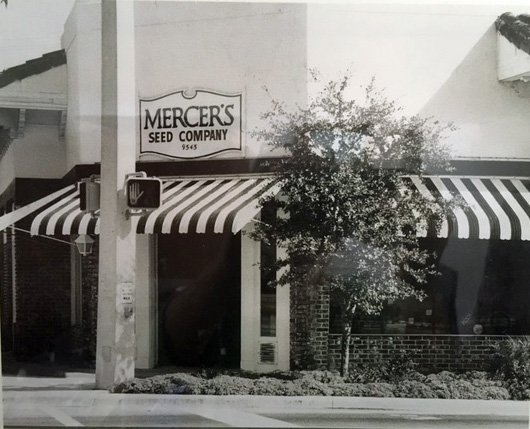 Over time, as a community develops and increases in size, various farming practices and customs change. While vegetable and fruit gardening has long been a component of living in Miami Shores, many of us today are almost completely cut off from the nature upon which the early settlers' lives depended.  Our farming roots were further severed by changes to the landscape code that forbade the planting of vegetables in front yards, thereby depriving some residents of the ability to grow their own food.  One current case, in which a resident is suing the village of Miami Shores over this part of the landscape code, is under appeal, and oral arguments are scheduled for August 21, 2017 (see footnote 5).

5. In August 2016, a local judge found that, "the prohibition of vegetable gardens except in backyards is rationally related to Miami Shores' legitimate interest in promoting and maintaining aesthetics,” and the Village’s decision to prohibit such plantings, therefore, "passes constitutional scrutiny."

Dr. Carol Hoffman-Guzman is a 30-year resident of Miami-Dade County, with a BA in anthropology from Cornell University and a PhD in sociology from FIU.  She currently resides in Miami Shores, where she has started researching the local history and plant life.  Carol’s interest lies in the common people who developed the area, as well as a community’s use and interaction with native and introduced plants from prehistoric to modern times.  She is also writing a book about the plants and people of the Lake Okeechobee area.  You can read her previous article for Bound by Beauty about the natural history of the area here.

Aspiring or published women writers can join Carol and friends at the Miami Shores Community Church for her Women Writers' Group.  For more information you can contact Carol at carolmhoffman@bellsouth.net.

Mad dogs, Englishmen, and, apparently, members of Bound by Beauty are out in the midday sun.  You can see from our rosy cheeks and noses, not to mention the glistening sweat, that we worked hard today to prepare the bed for the planting of the pine rockland plants on Saturday.  Lucky for us, we love doing what we do! 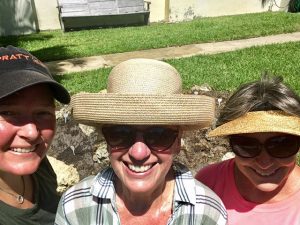 So what did we do?  We removed the plastic tarp that was solarizing the bed, then started sculpting a pine rockland, using coral rocks donated by members of the community.  We just may have created the highest point in Miami Shores! 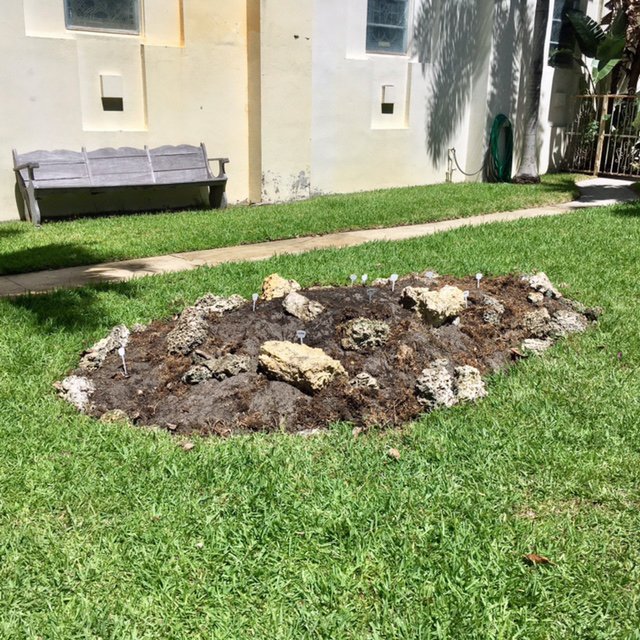 In the process of sculpting our pine rockland.

Then, we took the plants donated by Fairchild Garden's Protect to Connect Network and other generous folks, and placed them in a mockup of the garden to come.  We thought it looked pretty good! 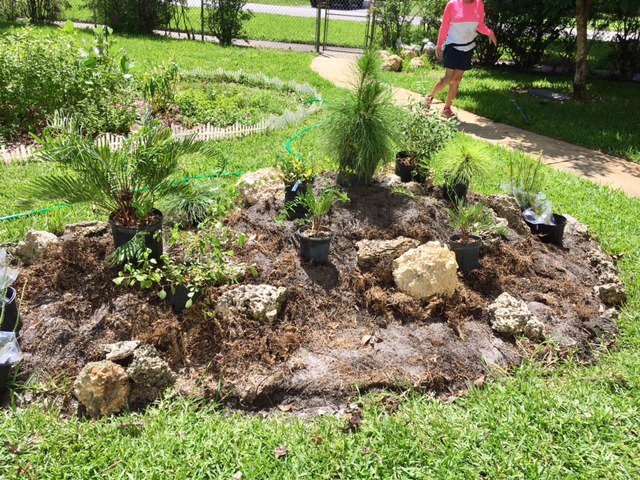 Last, but not least, we took the potted plants to the shade, where they will await the moment when their roots can stretch out into the soil.

Come join us on Saturday at 6 p.m. at the Miami Shores Community Church for the planting and a celebration of Miami Shores' Community Garden.  Bring your lawn chairs and favorite beverages, and join your neighbors in the relative cool of a summer evening.  We look forward to seeing lots of friends and neighbors!

END_OF_DOCUMENT_TOKEN_TO_BE_REPLACED

Bound by Beauty had a wonderful time at the Unity Day Fair in Miami Shores. Our booth featured a Monarch tower bedecked with Monarch chrysalises, and we even watched a couple of caterpillars pupate, which is always a thrilling sight.  Jill Leslie captured the remarkable process with her cell phone. 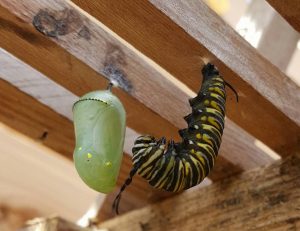 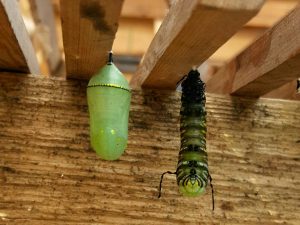 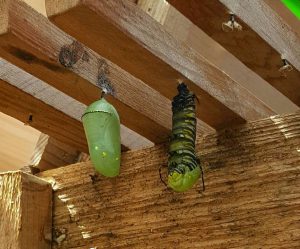 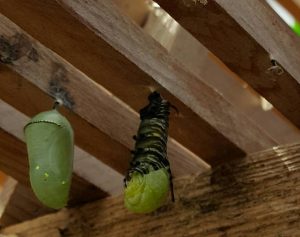 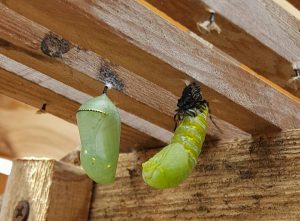 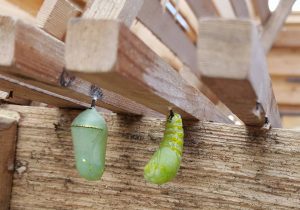 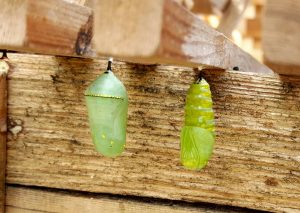 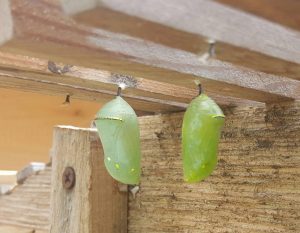 Bound by Beauty also had on hand a Pollinator Pledge, which a number of fair goers signed to protect our precious pollinators from the widespread use of pesticides. 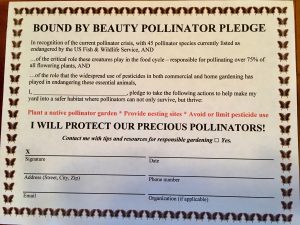 Those who signed got a butterfly named for them on our wall. 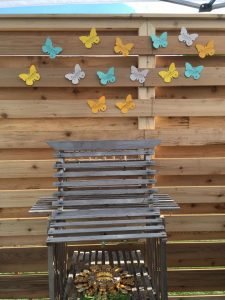 We offered a petition in support of a farmers' market in Miami Shores, and another in support of a ban on pesticides in public spaces.  There was also a signup sheet for neighbors who are interested in participating in the creation of a community butterfly/healing garden at the Miami Shores Community Church.  Many thanks to all who signed!

Most of all, we enjoyed meeting our neighbors on a beautiful day in South Florida.  Thank you Jen, Susan, Wendy, Jill, Doug, Roly, Ed, Salomon, Mike, Pete for setting up an awesome booth and being part of this lovely and meaningful day. 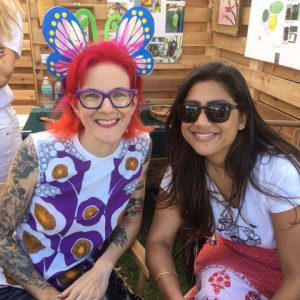 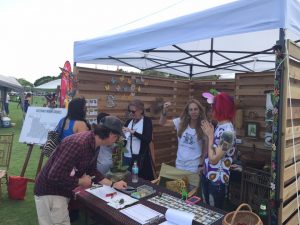 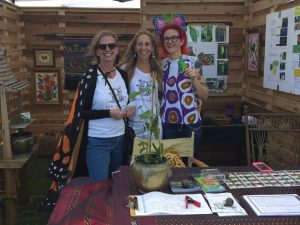 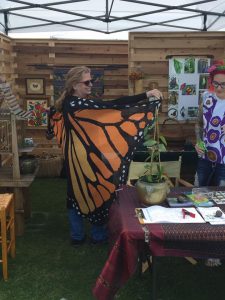 Bring butterflies to your garden with these 9 Florida Native host plants.